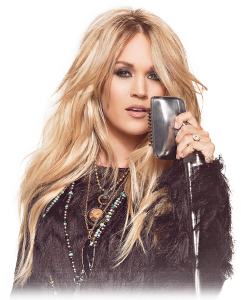 Carrie Marie Underwood is an American country singer, songwriter, and actress. With 6 Billboard Top Country Albums, 7 Grammy Awards, 12 American Music Awards, and a Voice of Versatility, she has cemented herself in not just country music history, but as one of the greatest artists of the century.
ALBUMS 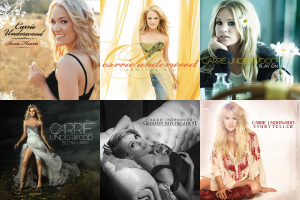 I cannot wait for her next album next year! Been craving new music!

Ready for some new music for sure!

Carrie is tied with Faith Hill for most nominations with 4 each. Winners will be revealed at a live concert event in Nashville on Thursday, December 14. You can vote ten times a day in each category from now through December 13th at RareCountryAwards.com

Story of the Year
Carrie Underwood – the Ultimate Hockey Fan

Grand Ole Opry® Moment of the Year
Reba Celebrates her Opry 40th, “Does He Love You,” feat. Carrie Underwood

Do you know if we’ll get the Storyteller Tour on DVD or is it just iTunes and digital?

Do you know if we’ll get the Storyteller Tour on DVD or is it just iTunes and digital?

I’m excited to see what Capitol Nashville can do for Carrie. Arista Nashville worked for her for a bit… but been disappointed with the last two albums in terms of promotion/single selection, so I’m hoping Capitol is a better fit!

While on paper, her last two eras were successful, I felt like so many things were done wrong in terms of direct album promo. Yes she appeared at so many amazing events (within and outside of country music), but the music videos for the Storyteller are trash. The singles should have been arranged completely different, and BA and Storyteller should have both had five singles. They always stop trying to promote the fourth but there are many albums that could be looked at that had very successful and long runs (Teenage Dream comes to mind).

Her song for the SuperBowl leaked (I think) online today. It’s called The Champion and it’s featuring Ludacris.

The song will be used for the Super Bowl as well as the Winter Olympics.

The song will be used for the Super Bowl as well as the Winter Olympics.

A harder sound for Carrie, but I admittedly kind of love it!

LOVE the new Super Bowl track! I’m ready for the next album.

Still haven’t listen to the Christmas album, was wondering if it’s good?