@Livelikemusic Depends on when she signed her deal right?

I believe she signed to RCA in 2012 and her debut album came out in 2014. She would have another year before she could even try the whole 7 year thing. The main difference between JoJo and Tinashe is that with JoJo, she signed her deal when she was a minor and the label wasn’t letting her release anything. She could get out of it easier because she was a minor when she signed to her label. Tinashe was already 19 when she signed and unlike Blackground, RCA has let Tinashe release singles here and there while Blackground wasn’t letting JoJo do that.

I would be all for Tinashe leaving RCA and if she can find a way to do that, that’s great, but I don’t think it’ll be that easy for her.

Though, SZA is on TDE and RCA… so I’d have to see if TDE could handle Tinashe all on her own, without the label of another label.

SZA was originally signed to TDE when she released Z and it looks they’re the ones responsible for the majority of the handling with Ctrl as well.
Also, Tinashe’s webstore has been updated with merch and a single signed bundle (CD+t-shirt). You can grab that here. The first 300 orders are signed.
Elliott 2018-03-30 22:10:58 UTC #92

The photograph on the bundle t-shirt is stunning. She looks like a combination of Britney, Beyonce and Rihanna. It would have made a nice album cover.
And the yellow hoodie is so slick, I’d buy it if it didn’t have any text on the back. “I don’t want people to look at it as I’m a prisoner in my [record] deal because that’s not accurate.”

“I don’t want people to look at it as I’m a prisoner in my [record] deal because that’s not accurate.”

The Japanese pressings have been updated to reflect a first press bonus; a sticker of her logo—which is cute and all, but they still haven’t updated what the bonus track(s) is/are, and we’re a week away. RCA remains messy.

That’s fake. Someone on ATRL was trolling.

People are getting it now! 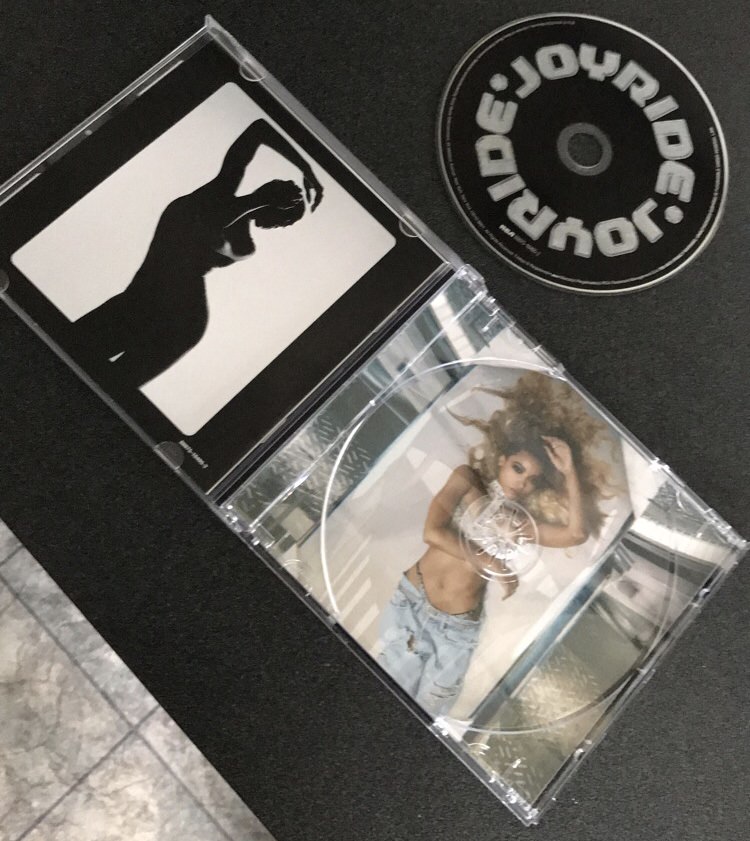 After listening to the album on repeat throughout the day, I’ve come tor really enjoy it. While its level of cohesiveness is debatable at times and the more upbeat sound is a slight shift from her usual darker material, it’s overall, refreshing to hear. “Ooh La La” and “No Contest” would make great post-album-release singles, particularly with the former’s “Dilemma” (Nelly) sample - a nice throwback to early 2000s R&B.

tinashenow So my second album dropped today and honestly, idk what to do now? Lol like do I cry, do I go to shake shack, do I lay in bed all day? Like, what is the appropriate way to celebrate hitting a goal 3+ years in the making?! I can’t even process my emotions… I just hope that everyone is enjoying the music cuz WOW #JOYRIDE is FINALLY HERE! Thank you to everyone who supported me along the way… you know who you are. I guess I’ll have some more champagne now

I’m so fucking happy for her.
Consequence of Sound also has this great track by track by her too. Here’s a few cliff-notes:

1. “He Don’t Want It” was written in 2013 when she was working an Aquarius and Black Water.
2. “Salt” was recorded in her bedroom.
3. “Ain’t Good For Ya” was originally a full length track, but she decided it worked better as an interlude.
4. “Faded Love”, “No Drama”, “Me so Bad” and “Ooh La La” are the only tracks not on the initial iteration of the album.

Interview with Billboard too. She let loose what went down with the title track.

The album’s trouble started with its title track, co-written with Travis Scott and Hit-Boy. “I remember texting [Scott] like, ‘Yo, this is my shit, I want to name my album Joyride,’” she recalls. “Then he started dating Rihanna, and he kind of iced me out.”

Rihanna purchased the track for herself. “It messed up our relationship for a while,” says Tinashe of Scott. “I don’t think I spoke to him for six months. But I guess eventually she didn’t use the song, and I was like, ‘I still want it! Can I have it back?’” She brushes a long curl off her shoulder. “So I got it back, revamped it, took Travis off it, and now it’s a new day!”

So, it looks like Tinashe sued RCA and that’s why we now have Joyride.

In the booklet, she thanks Dina LaPolt and Danielle Price for pushing the album out. They’re the same legal team that got Fifth Harmony’s self-titled out as well.

The fact that some artists have to sue their own record labels to release music is just absurd.

Avril Lavigne had trouble with RCA while trying to release Goodbye Lullaby and ended up leaving the label and signing with another 7 months later. So with that in mind, I’m definitely curious to see how Tinashe plays her cards out, does her future with RCA look more promising thanks to LaPolt and Price, or will she leave the label down the track this year.